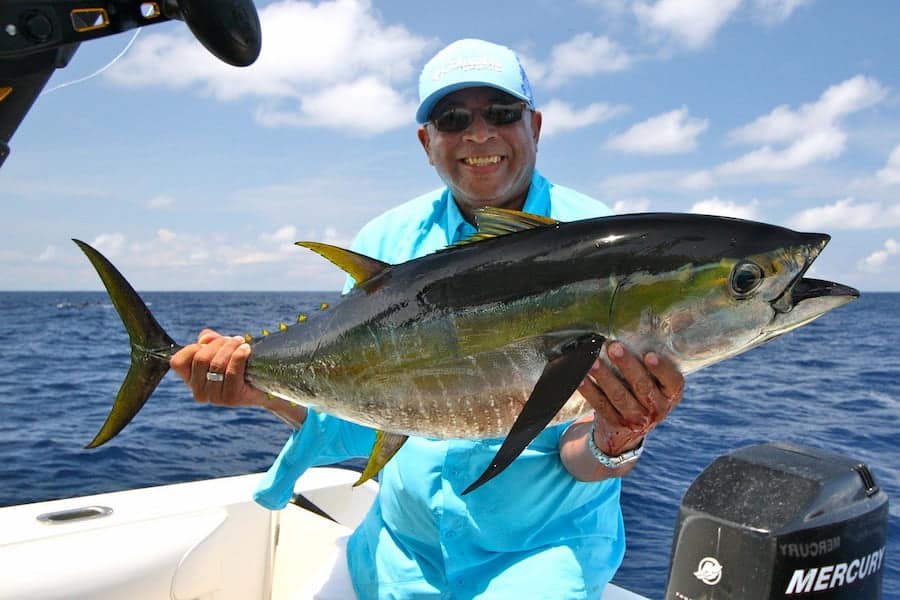 As an Amazon Associate we earn from qualifying purchases.

Yellowfin tuna is among the most popular fish to catch when you’re out offshore fishing. They are generally abundant for most of the year. If you plan on going on a fishing trip for yellowfin tuna, you should first learn how to catch a yellowfin tuna.

How to Catch Yellowfin Tuna

The best approach for catching yellowfin tuna would be trolling. It’s the best chance for landing a large yellowfin tuna. Use cedar plugs, tuna feathers, or plastic trolling lures that have blue or white colors to attract yellowfin tuna.

Yellowfin tuna feeds near the surface of the water most of the time. Hence, most topwater techniques like trolling are the best options. Yellowfin tuna can see well so it’s better to catch them at night.

Use fluorocarbon lead to help reduce the visibility and abrasion during tuna fishing. It is also recommended to use double hooks to reduce the chance of the yellowfin tuna escaping your line since they are so powerful and shaky.

An Overview of Yellowfin Tuna

Yellowfin tuna is a popular offshore game fish. It is known for its beauty and delicious meat. You can find yellowfin tuna in most of the world’s warm waters. They generally travel in large schools only breaking formation when chasing after bait.

Yellowfin tuna swim a lot of distance throughout their lifetimes. They can reach sizes exceeding 400 pounds. These large yellowfin tuna can mostly be found in the Eastern Pacific around Mexico. Yellowfin tuna eat many different things like:

When they set their focus on bait, they will ignore other baits in the area. This might be the reason why you can’t get a bite even though you can see them on the surface.

Like most tuna, yellowfin tuna use their weight to pull back and put up a fight. They rarely jump when hooked although some people claim they’ve seen yellowfin tuna jump out of the water to grab a bait or lure.

They tend to swim sideways and in large circles when you get them near your boat taking you longer to haul it in. Hence, you should always expect to take a lot of time when trying to haul in a large yellowfin tuna.

Yellowfin tuna has a lot of strength and stamina. They can dive deep if you have a long line on your reel. Therefore, you shouldn’t overexert yourself and rest in between bites and even during bites. That’s why it’s recommended to fish with a group of people for help.

It depends on your location and time of the year. Most locals near yellowfin tuna fishing spots call it the “tuna season”. For example, if you plan to fish in Costa Rica, the best time to do it is between May and November during the rainy season where yellowfin tuna is abundant.

In Panama, the peak seasons are during June, July, and August. Basically, most places have peak tuna season during the rainy season. It’s also best to hunt them during the night (between dusk and dawn).

Another way of spotting them, as long as you’re in warm waters, is by looking for diving birds and schools of spinner dolphins. When these animals are present it usually means there are also schools of yellowfin tuna swimming nearby.

For Folks in the United States

If you live in the United States, you can catch yellowfin tuna all year round if you fish in Venice, Louisiana. If you live on the east coast or south side, then the place should be near you.

If you live in the west coast, just head over off the coast of Southern California. Yellowfin tuna can be found there all year round.

Some of the biggest yellowfin tuna can be found on the Pacific Coast of Mexico. Puerto Vallarta also has some large yellowfin tuna in some parts of Panama.

You may also want to visit Ascension Island if you want to fish in the Atlantic. It’s in the middle of South America and Africa. There are a lot of yellowfin tuna there as well as in Kona, Hawaii if you plan to hunt in the Pacific.

Also, yellowfin tuna also tend to be near oil rigs so it’s best to start tracking out the different oil rigs near the equatorial line (warm tropical waters).

For catching yellowfin tuna, you need a boat and some fishing gear. Yellowfin tuna are some of the strongest and wildest fights you will ever face at sea. Hence, your fishing gear should be durable and strong enough to tackle a large yellowfin tuna.

Tackle to Use for Yellowfin Tuna

Scale your tackle to the size of the yellowfin tuna you’re targeting. Large yellowfin tuna require heavy fishing gear and a lot of 100-pound braided lines. Lighter yellowfin tuna weighing between 10 to 15 pounds can be great for light tackles in the 15-pound range.

It’s best to have multiple tackles in case one break and for a higher chance of catching one.

Lures to Use for Yellowfin Tuna

For trolling, try to use tuna feathers, cedar plugs, and plastic skirted trolling lures. Choose lures that are colored blue and/or white. Green is also another option. Also, choose a trolling plug that can troll very fast. We recommend using double hooks since they bend or shake less.

Live Baits to Use for Yellowfin Tuna

Anchovies and sardines are great for smaller schools of yellowfin tuna. For larger schools, you may want to use Pacific Mackerel. If you want to catch some of the largest yellowfin tuna around, use a large live Skipjack Tuna around 2 to 5 pounds in size.

It’s also okay to try other types of baitfish. A certain type of bait may be the main prey the tuna feeds on in a certain area. Squid is also an alternative especially when you’re fishing at night.

If you don’t have live baits, you can try chunking. Chunking involves cutting a large baitfish into chunks and throwing them to the sides. One of the chunks contains a hook as you let it drift naturally along with the rest of the chunk. Make sure to let out a lot of lines so the chunk can drift naturally.

How Hard Is It to Catch Yellowfin Tuna?

It is hard to catch yellowfin tuna when they have set their sight on a tiny bait. This bait might not have your hook on and so will ignore other baits of yours.

If you ever get it hooked, yellowfin tuna are known to put up a fight. A fight with a large tuna could last for hours and you may even need the help of someone else to give you time to rest.

Yellowfin tuna often follow porpoises around and they eat a lot of things like sardines, mackerel, squid, and other small baits. It all ends up to how attractive your bait is so the yellowfin tuna will set its sight on it.

What Size Boat Do I Need to Go Offshore?

Yellowfin tuna are generally caught offshore, so you need a boat. You can fish offshore for yellowfin tuna in a boat as small as 10 feet. It’s recommended to use a boat of at least 15 feet in length for better safety and efficiency.

For group fishing, A boat 30 to 40 feet in length is best and can accommodate lots of catches and have enough space for other things.

What Do Yellowfin Tuna Eat?

During their juvenile stage, yellowfin tuna feeds on tiny zooplankton. When they reach the adult stage, they hunt large, bony fish like sardines and mackerel. They also prey on squids too.

How Long Do Yellowfin Tuna Live?

Yellowfin tuna can live up to 6 to 7 years. If you catch a large one, chances are it’s around 5+ years old already.

No comments to show.